OMG, The Try Guys Are Coming To Singapore!!

Youtube’s most famous four, silly, handsome and down-right hilarious men have added Singapore to one of their locations in their world tour, 'Legends of the Internet'. Still trying to stay positive is proving to be a bit difficult when you know Keith, Ned, Zach, and Eugene aren’t coming around to Malaysia but who knows - they might make a surprise visit and we will get to see them walking around Pavilion Mall or something..(I don’t know anything, I swear)

In 2014, was when the Try Guys were born (not like, out of the vajayjay) and after quitting Buzzfeed in 2018, the quartet got together and turned the name into its own Youtube channel.

Established in 2014 when the boys were working at Buzzfeed, their first ever video, and my personal favourite, was them trying on women’s underwear for the first time!

Let's just take a moment and appreciate Eugene's hair. O.M.G...*swoons* it has come a long was, hasn't it...

Staying true to their name, the group of close friends started gaining their internet fame through trying out all types of weird and funny sh*t for the first time and people (including me) find it entertaining AF! 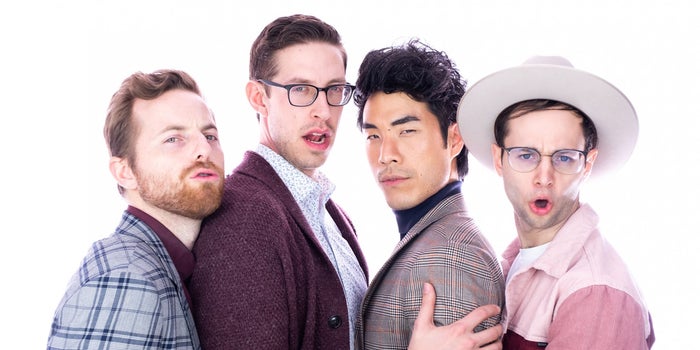 Now with 6.2 million subscribers on YouTube, they are still going strong with making videos of them trying out and experiencing new things (as their name screams out XD).

What are the Try Guys doing in Singapore?

There will be a live audience so the boys will be getting live reactions to their boisterous shenanigans and meeting fans alongside performing live at Singapore's Star Theatre on 28 September will as part of their first ever world tour, Legends of the Internet!

Here is a glimpse of what’s in-store :

If you’ve dreamed of meeting the Try Guys, tickets are already up for grabs since Wednesday, 7 August via SISTIC. If ya fancy a pair of VIP tickets, they are priced at SGD298 (RM903), as they include Meet-and-Greet passes and exclusive The Try Guys merchandise.